The place that inspired Antoni Gaudí

It is in the Baix Camp, the place where the architect was born and grown up

Antoni Gaudí always said that his main source of inspiration was nature. Until now, therehave been several theories about the possible places of Catalan (and foreign) geography that could have inspired the architect: Sant Miquel del Fai, the cement asland from Garraf, the Montserrat mountain, la Mola de Gallifa or even the mountains of Cappadoccia, in Turkey.


Now, for the first time, one place unites all the conditions to be the place that would have inspired him. We are talking about el coll de la Desenrocada, located between the municipalities of l'Argentera and Vilanova d'Escornalbou. Here, from a single point, it is possible to appreciate many rocks that have a great similarity to the most iconic elements of Gaudí's work, such as the facade and chimneys of la Pedrera,the dragon and pillars of Parc Guell, or balconies and great balcony of Casa Batlló.


The discovery has been made by an archaeologist and a professor at UPC, Paula Santamaria and Josep Pedret, after a year and a half of investigation, and is supported by the historian and adviser to Centre Gaudí de Reus, Jaume Massó. According to this Gaudí expert this thesis "is very likely because we are talking of a family place for Gaudí", said to SÀPIENS. Indeed, el coll de la Desenroscada is found very near to where Gaudí was born, and spent his infancy and youth. There are also documents that demonstrate that the architect often visited this area when he was living in Barcelona, at the beginning of the twentieth century. In fact, el coll de la Desenrocada is found at the crossroads of the old roads that led to Riudecanyes, l'Argentera, Vilanova and Colldejou, and was a crossing point in Gaudí's time. 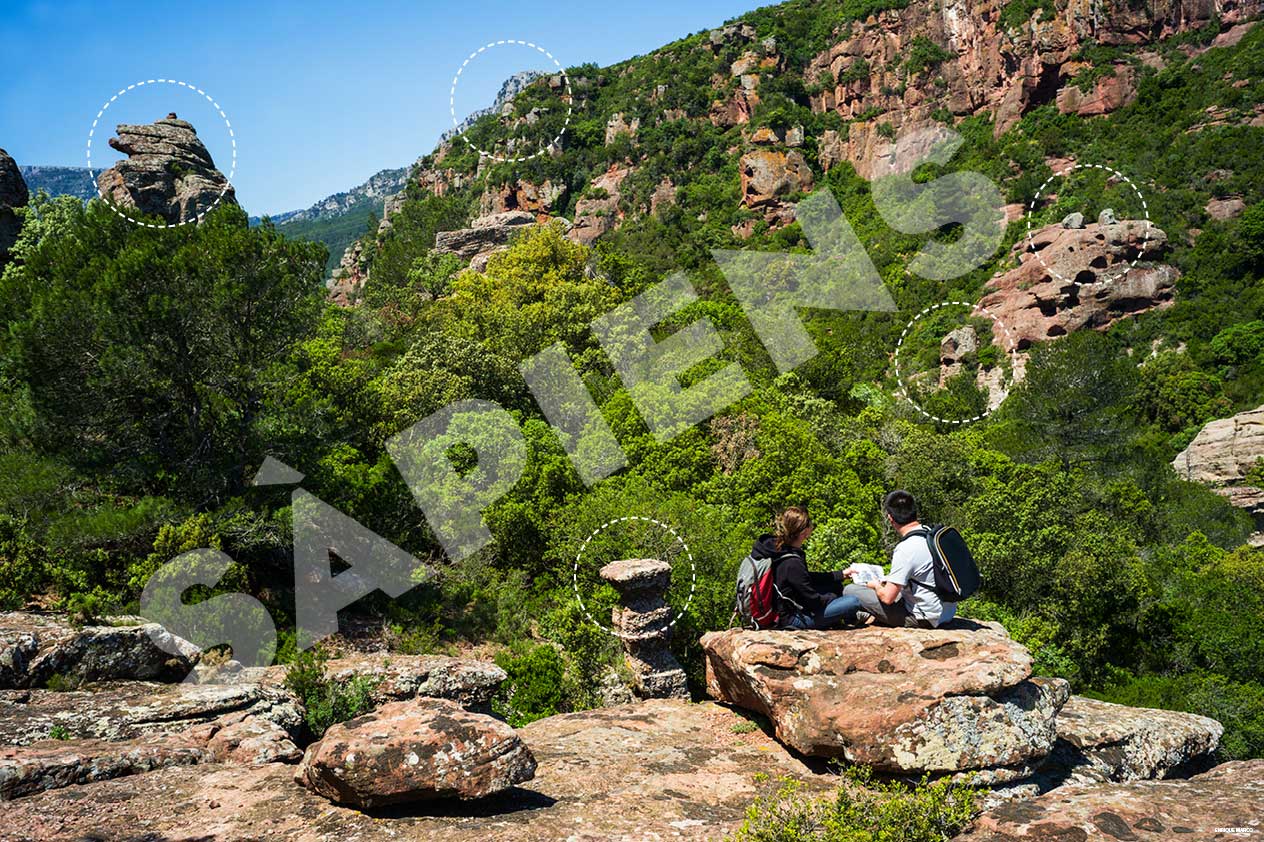 THE EXACT PLACE WHERE GAUDÍ COULD HAVE TAKEN NOTES

From this large flat stone, where Paula Santamaria and Josep Pedret are sitting, almost all of the Gaudí elements can be seen at first glance: the holes in the facade and the stairwells of la Pedrera, and the pillars and dragon of Parc Guell. That is why it is the place the two investigators believe Gaudí could have sat, and started to draw.


On the left, out of picture, there are caves that could have inspired the door of la Pedrera, the roof of la Pedrera and Parc Guell, and the tribune of Casa Batlló. In the image, some of these elements are partly hidden by the thick vegetation coverage (like the stairwell or pillar) but it is known that the area was not as lush in Gaudí´s time, as exploitation of the forest, and goats, kept the underbush clean.

Ten minutes on foot from here is the cave reminiscent of the balconies of Casa Batlló. 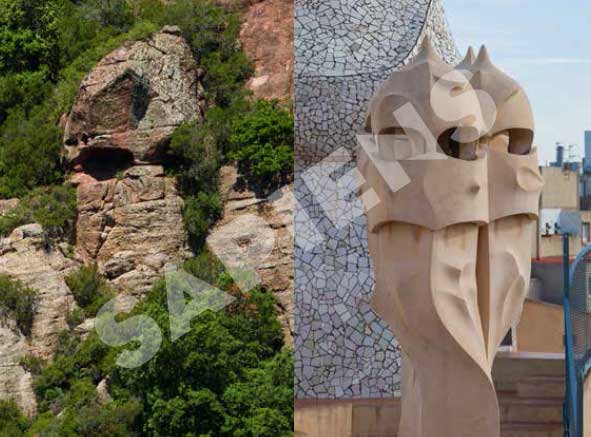 In this secondary rock, which stands out from the main rock of la Desenrocada, the two ´eyes` can be seen well (one eye now covered by hedges) with a sharp flat covering, very similar to the case of the celebrated chimneys of la Pedrera. 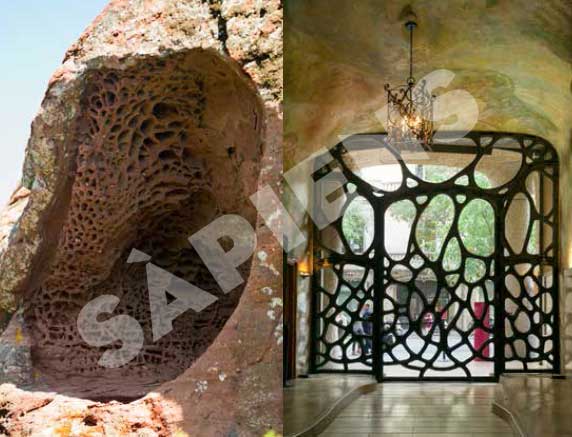 Example of the fanciful shapes of erotion that conform to what is known as ´red sandstone of Buntsandstein` , a soft and maleable sandstone very common to the Baix Camp region. In this case, its erosion brings to mind the iron main doors of la Pedrera . 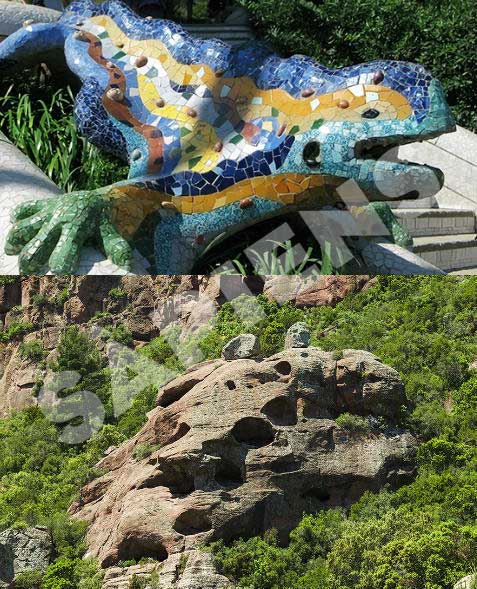 THE SILHOUETTE OF THE DRAGON

The form of the dragon of Parc Guell can be seen in the silhouette of the main rock of la Desenrocada. The head is on the right, with the eye and mouth in the same position as in Gaudí´s figure. At the bottom, one can make out the leg and undulating contour of the back. The figure can be seen better or worse depending on the position of the sun, and the shadows made by the caves. This picture was taken at 14.00.

Geologic form of one of the caves of Desenrocada, very similar to the tribune of the main floor of Casa Batlló.

The rock of two eyes of la Desenrocada is the first place that made Paula Santamaria and Josep Pedret think of Gaudí´s work. From that moment, the archaeologist and engineer portrayed the place in comparison with the work of Gaudí. 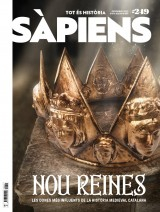 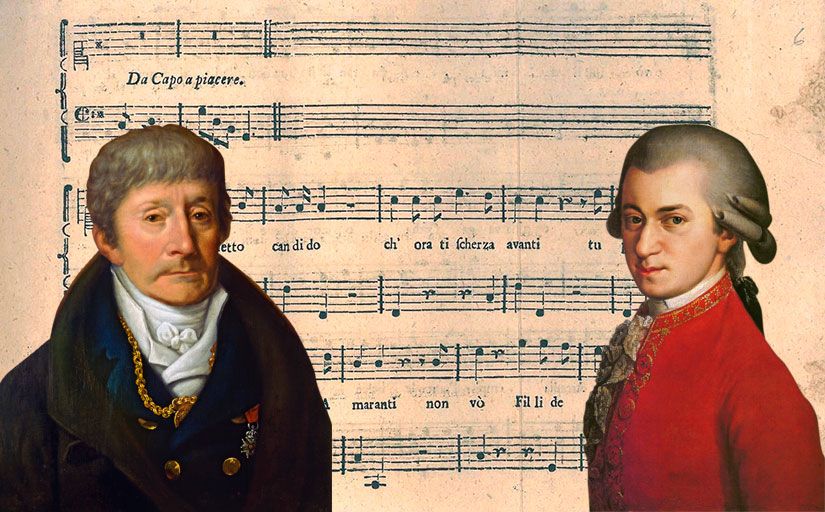